The bike was in to John Furbur for a full tuneup before I put it away. 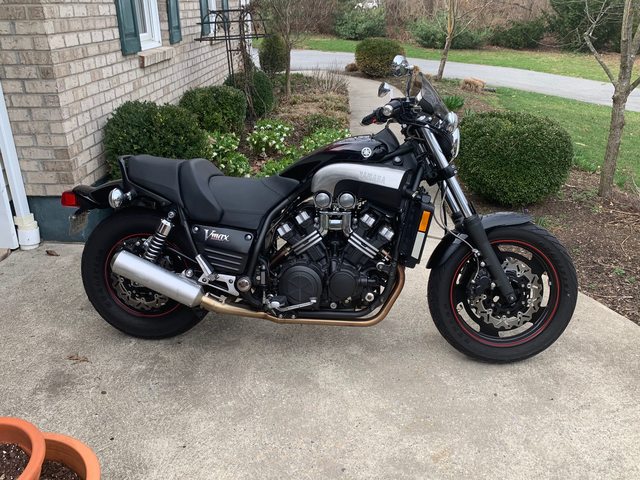 Too-pretty to ride! Someone will appreciate that.

The bike was in to John Furbur for a full tuneup before I put it away.

Marks exhaust is super,,the other changes listed IMHO are a negative. It does look nice for sure.
S

The bike is sold to DaveM!

Time to put that in a climate-controlled bubble-bag, and preserve it for 50 years, to-be "the lowest mileage VMax known to-man."

It might be the last gas-powered vehicle/motorcycle by then.

Schoolchildren can come-by and see it on field trips, travelling through Elon Musk's WorldTunnels to arrive at the antique display of obsolete technology.

I have an acquaintance in TX who bought a 1978 Corvette Indy Pace Car, he sold it after awhile to a museum with 10 miles on it.
S

Congrats DaveM. One2dmax,s chrome kit would do wonders along with better looking cans. Maybe polish em. That bike deserves to be out keeping the Legend alive amazing others both young and old.
Last edited: Apr 2, 2021

sandy klock said:
Congrats DaveM. One2dmax,s chrome kit would do wonders along with better looking cans. Maybe polish em. That bike deserves to be out keeping the Legend alive amazing others both young and old.
Click to expand...

I agree, the Morley Muscle chrome kit would probably get you some votes for best in class at a bike show, given how-clean that bike is. The bike in its present state, reminds me of this Yamaha offering, from the early 1980's. The Yamaha XS1100 came in different models: a standard, a cruiser (the Special), and the Midnight, which to me, was a bit gaudy, but they sold a lot of 'em. The Midnight Edition was across the lines, they offered it in other engine displacements, and it was the most-expensive option. For a brief period of time the XS-Eleven as it was sometimes called was right-there, as the fastest bike on the market.

My personal preference is a chrome package rather-than the gold package like Yamaha offered. Tellingly, someone at Yamaha had the good sense not-to offer a Midnight Edition VMax.

My neighbor, who was a retired NYPD detective, had a son who owned one of these, the XS Eleven Midnight Edition. I watched it sit and slowly-deteriorate, as he had stopped riding it, but it sat on the covered porch, oxidizing (we're a mile from the Atlantic Ocean high-tide line). I made him an offer, which he relayed to his son, as a non-running bike, I valued it at <$1K, but his son thought it was worth-more. I told him, "it's gonna cost you more-than that, taking it to the dealer, to get it back on the road," but he rebuffed the offer. The bike continued to sit for probably another year, before it disappeared, I didn't bother inquiring as-to its destination.

The Midnight Edition bikes, if they're not well-maintained quickly look tawdry, like a sloppy young woman with a French manicure gone to-hell, really-disgusting.

I still have three XS11's that I ride regularly.

Reasonably fast, indestructible, and easy to work on.

A fellow here in so. FL who had a Snap-On sales route, had a yellow XS-11, turbocharged. He took good care of his bikes, and that one was gorgeous. A friend of his and he did the turbo installations on their bikes. He said it never gave him a bit of issues.
You must log in or register to reply here.
Share:
Facebook Twitter Reddit Pinterest Tumblr WhatsApp Email Link