Menu
Log in
Register
Install the app
You are using an out of date browser. It may not display this or other websites correctly.
You should upgrade or use an alternative browser.

What’s on your Goto riding jacket

I prefer anonymity: "officer, he was in all-black!" That should narrow things down among the near 600,000 motorcycles registered here (Florida). Interestingly, there are nearly twice that-many CCW (concealed-carry weapon) licenses issued in the state. One-in-twenty FL citizens is allowed to concealed-carry.

I have two nylon-mesh armored jackets. One is the first model Joe Rocket I ever-saw, of that style. I bought it immediately. It's still probably my favorite for the FL temperatures. I bought a much-newer Fieldsheer nylon-mesh jacket, but the Joe Rocket has superior airflow. The Fieldsheer has a tactical advantage: nylon windbreaker insert, Thinsulate-type pleated removable liner, better armor. If riding temps are going to be < 70 degrees F, it's a better choice. This is so. FL, so that possibility is a winter thing.

I have a beautiful Alpinestar leather competition jacket, I rarely use, because it doesn't get that cold in so. FL. I also have a Dainese 1-pc riding suit in nylon, it's insulated, and is meant to be used for a sportbike instead of a cruiser, as it's a colorful combination. It's predominantly white, with red and black designs. I bought it at a BMW dealership on a sale, if you've ever set-foot in a BMW motorcycle dealership, it's like the H-D shops, ain't nuthin' cheap.

When I was younger, I bought a full Belstaff suit, Screwloose and MaxMidnight will be familiar with those. Barbour was the alternative to that, both are/were waxed waterproof cotton, though I believe they use more-modern fabrics now; the waxed cotton I think is still-available. Wear a well-used one of those into any bike shop in the world, and they know you're an enthusiast. The jacket finally disintegrated, but the pants, being less-frequently-used, are still a viable garment.

I have a reflective oversize windbreaker I can slip-over any jacket I have, to make me highly-visible at night, if I desire. It's amazing how far-away you can see it when a vehicle's headlights illuminate it.
Last edited: Aug 15, 2021

I just bought a new Alpine Stars jacket at the start of this year. My old Joe Rocket had just had it. This is the one I bought: 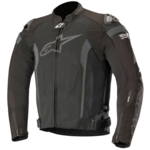 I had the leather I used to wear when I was 20 still in the closet. It wasn't practical for me to try to zip it anymore. Gifted it to my youngest son. Roughly 40 years old, it was just starting to get broken in. Yes it was black. I have a near carbon copy of it now that's close to two decades old. Nowhere near broken in. I'll have to put it in my will I guess...

The crux of the matter is that the leather doesn't see near the usage in Arizona that it did back east. Armored nylon or mesh see far more road time. Now that you bring it up, I'm due for a new midweight jacket.

This is the one I have. I remove the liner (hoodie) in the summer.

My father in law has a nice jacket for sale if anyone is looking. I think he would like to get $150 out of it and the gloves.

https://www.britishmotorcyclegear.com/media/catalog/product/cache/413a312024f7e20b3a47c6261ff67e7e/m/o/motorycle_jacket_for_hot_weathr_bmg_zodiac_0004_1__1.png
lots of vents. loosen the zippers on the cuffs and you get instant wind tunnels
later, bill

Nothing on it but here's my Alpinestars, added some more padding in the chest and back

My 'Went to', original jacket had 'Triumph' on one side and a 'Sergent Peppers Lonely Hearts Club Band' patch on the other.
What I can't figure is why it appears to keep shrinking as I get older!

...must have been cheap leather?

MaxMidnight said:
What I can't figure is why it appears to keep shrinking as I get older!

Yes indeed, it is the damp weather that is to blame also explains why the suspension sits lower.
W

I have a Langlitz in storage. It's to small for me.

Two part "Fieldsheer" for my racing jacket/pant combo. Can't remember the brand of my riding jacket but it was sold through the VMOA years ago with various Vmax patches on it.

You must log in or register to reply here.

KNEW NOTHING ABOUT MY VMAX BUT NOW, A YEAR LATER...

M
What do you all think of my luggage solution?
2